A year ago, I touted in-browser Sass editing via source maps. As cool as that is, there are minimum dependency requirements, and Sass still needs to be compiled somehow. Sometimes, it’s not an option to update dependencies, and sometimes, compiling can be slow— I’m looking at you, Compass. I recently gave Emmet's updated LiveStyle project another spin, and, as excited as I am about LibSass, let me tell you— the fastest compiler is no compiler at all.

You’ve probably heard of Emmet— if you write HTML markup on a regular basis and you’re not using the Emmet plugin, you’re typing too much. Emmet also makes Re:view, a fantastic responsive testing tool I use on all of my projects (makes for great screenshots). I tried out LiveStyle a couple years ago but ultimately relegated it to my “check back later” folder, hoping it would one day be functional and easier to use. I’m happy to say that time has come.

Currently, both Sublime Text and Google Chrome are required. With that in mind, there are only two installation steps:

Adding LiveStyle to a Project 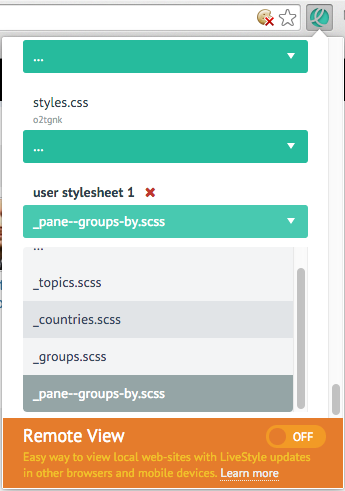 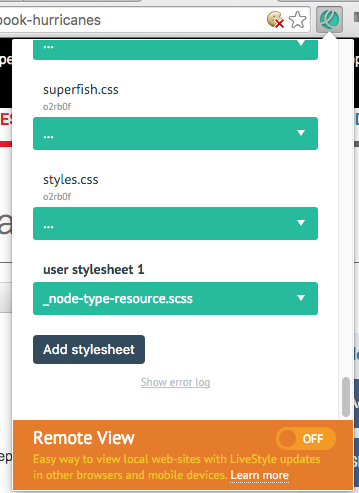 Now the fun begins. What does “bi-directional editing” mean? It means you can keep making tweaks in the DevTools Elements tab because it’s quick and easy. But instead of having to either remember or copy those changes back into your source file manually, LiveStyle does it for you.

Yes, you read that correctly. Changes made in the Elements tab / browser are copied over in real-time to your source file and vice versa. Let that sink in for a minute.

I’m currently working on a project involving additions to a Drupal 7 theme. The site was launched over 2 years ago and uses a pre-source map version of Compass. Updating Compass right now is not an option. There are a limited number of designs to reference, so much of my work will require extrapolating existing design patterns, which I’ll do mostly in Chrome’s DevTools. It’s a perfect candidate for LiveStyle.

Here, I made a change in Sublime Text and another in DevTools. Both were immediately replicated. If I used the project’s default Grunt Compass task to compile the Sass, it would’ve taken approximately 13 seconds before LiveReload showed the changes in my browser. Instead, this happened instantly, with no compiler running.

LiveStyle’s magic is derived from what it calls “source patching”: “Instead of replacing code, it detects CSS properties you’ve changed, affected CSS rules and maps those changes to another source. You can think of it as React for CSS: instead of replacing view contents with plain innerHTML, it applies a series of advanced techniques to detect and update only changed parts and keep previous state as much as possible.” Whatever voodoo it’s doing, I’m a fan.

Hopefully, this intro helps you get started using LiveStyle on one of your projects. If you have any suggestions or tips, please share them in the comments section below.